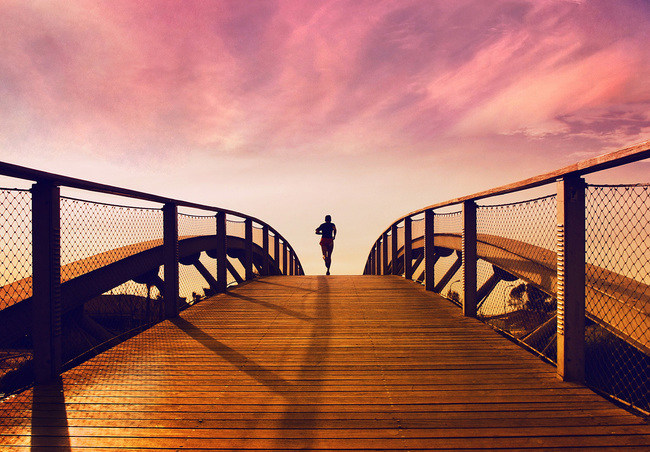 This is an essay originally written and published by Stemmings.

In physics, there’s a concept of inertia. It’s the idea that an object at rest stays at rest until acted upon by a force. The thing is, it’s not just limited to physical objects; we encounter inertia even in our minds.

For most of my life I hated running. I really hated it. So I didn’t do it. The inertia one must overcome to go from a couch to 5K is staggering. If you don’t regularly run, then it’s surprising how difficult it is to run even a single mile.

Five kilometers, more commonly referred to as 5K (3.1 miles), is essentially the minimum distance for most semi-experienced runners. As a new runner, I started a couch-to-5K program that required me to make slow increases from 30 seconds of interval walking to eventually running for 20 minutes straight. It took 8 weeks and there were no shortcuts. In the end, I overcame that inertia.

When I finally reached that first 5K, it felt amazing. Immediately, the next goal I set was 10K. When I hit that, I moved up to 12K, and it goes on. It’s gets easier, more rewarding and… fun. Running for fun seemed like an impossible task to me. Now it’s a task I undertake 3 – 4 times per week.
Since I started running, my productivity and interface designs have gotten progressively better. I could attribute it to being healthier, feeling better, getting outside, feeling more confident and a host of other reasons, but even with all of those things, I believe the real reason is more basic than that. It’s mental physics. It’s inertia of the mind and it’s powerful. Not just in running but in nearly everything.

Sometimes it’s not just about desire or willpower. Everyone has off-days. Sometimes you didn’t get enough sleep, don’t feel well, got a slow start, or any number of other things. Whatever the case is, successfully completing a run is never as simple as just willing yourself across the finish line.
You can boil productivity and even good interfaces down to momentum. Whether it’s building a project or purchasing a product online, it’s always harder to move forward from a stand-still. Humans are wired to crave rewards. The awesome feeling of achievement is generally attributed to a neurotransmitter called dopamine. You may have even heard buzz terms like “Dopamine Drip” (which is usually not correctly used, but I digress…).
The key is that finishing something feels good, no matter how small a task that might be. Our minds don’t just react to direct rewards; the mind is subconsciously aware of what tasks might bring it closer to a larger reward. Part of that encouragement is designed make any step towards a goal result in a good and fulfilling feeling.

It seems simple, but you can really kick-start productivity by just getting something done. I have seen some methodologies that encourage you to “get it done” or “just ship it.” They are certainly barking up the right tree. It’s far too easy to get caught up in talking about doing something, planning it and engaging in fancy procrastination.
Due to this, a part of to my design process is what I call the springboard. Once familiar with a project, I start creating designs, cool ideas, or mock-ups. This work will never see the light of day as a product or interface. I have seen many designers who think that jumping into just designing is bad. But I believe it gets the train to leave the station. Momentum helps overcome inertia, and doing something will build that momentum to help resist the temptation to procrastinate and not create.

Momentum is good for more than just productivity. A great way to engage customers on a website or in a video game is to give them small interactions or tasks that react clearly or reward them. Don’t believe me? Case in point: there are hundreds of apps for popping bubbles. Its not complicated but it sure feels good. Often times, it’s hard to know where to start in games or websites. Building up inertia by giving bite-size actions or tasks followed by small rewards can easily build up the force of engagement. It’s not uncommon to hear of people getting sucked into games like Civilization or websites like Cracked.com for hours at a time. Momentum is tough to stop and usually that’s exactly what you want.

Try it out. Not sure you should make the Dribbble post? Have a cool app idea? Need to get to work but the work seems too much? Just do something. Then something else. Before you know it, you will be off to the races.

In the digital design industry, a “unicorn” is a designer that can create outstanding identity, websites, web or application UI, user experience flows and studies as well as implement their work. Basically, a talented design generalist.... Continue →